YOU THINK YOU’RE A TOUGH GUY…?

Take a look at this billy badass, Major Henry Elrod.

Dude took on 22 enemy fighter planes by himself in the air, singlehandedly sank an enemy destroyer, and then led an INFANTRY charge on the ground, capturing an enemy machine gun and straight-up turned it on the invading forces… 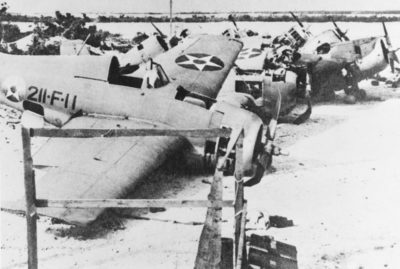 Of the circumstances surrounding the US involvement in WWII, Pearl Harbor is the attack that stands out.

However, this was not the only US military base to be attacked by the Japanese forces. The Wake Island base was attacked at the same time, but this was a much longer engagement.

While the attack on Pearl Harbor was over in a matter of hours, Wake Island fought for 15 days. Many men lost their lives while others distinguished themselves. One of these men was Henry T. Elrod who has become known as one of the defenders of Wake Island.

Elrod was born in Georgia on September 27, 1905. He attended the University of Georgia and Yale before heading to the military. At this time, he joined the Marine Corps where he was made a second lieutenant in February 1931.

Over the next year, he would spend time at the Marine Corps Basic School as an aviator student.

By February 1935, he earned his wings and was transferred from the Naval Air Station Pensacola to the Marine Corps Base Quantico. He served as a Marine Aviator there until January 1938.

In July 1938, he was ordered to San Diego. He served as the material, personnel, and parachute officer until January 1941.